Business Name Guide: How to Choose Your Name in Quebec

Business Name Requirements & How to Avoid Having Your Name Rejected

Written by Marwane Belhajjam
Updated over a week ago

You can choose a name in French that the company will use in Quebec, other than your personal name, and under which it identifies itself to carry out its activities. If you would like to add a version of this name in a language other than French, please let us know before submitting the name.

Your company's name must be in French, unique, and contain three components:

Here are some linguistic notions to respect when choosing a business name in Quebec IN-531:

• The Generic Element must be in French.

• The placement of the generic within the name

• The accents in the French language

You can choose to identify your business by a name other than your personal name, as long as this name is in French. If you want to add a version of this name in a language other than French, please let us know before submitting the name.

Natural persons who were previously registered under a name that included their first and last names, or under another name, must re-register. They will be reassigned their previous NEQ. We unfortunately cannot assist with registering a sole proprietorship in Québec if you already have an NEQ.

To make sure that the declaration of registration is not entirely rejected because the name of an establishment was refused by the Registraire des entreprises, you must proceed in two steps:

1/ You must file a declaration of registration without declaring any establishments.

2/ Once the declaration of registration has been published in the enterprise register, you must file a current updating declaration to declare establishments.

Your other option is to choose a numbered company.

A numbered company is an automatically generated number that will represent your corporation's name. For example: 1234-5678 Québec inc.

If the name you want is taken, you will be immediately notified on Ownr: 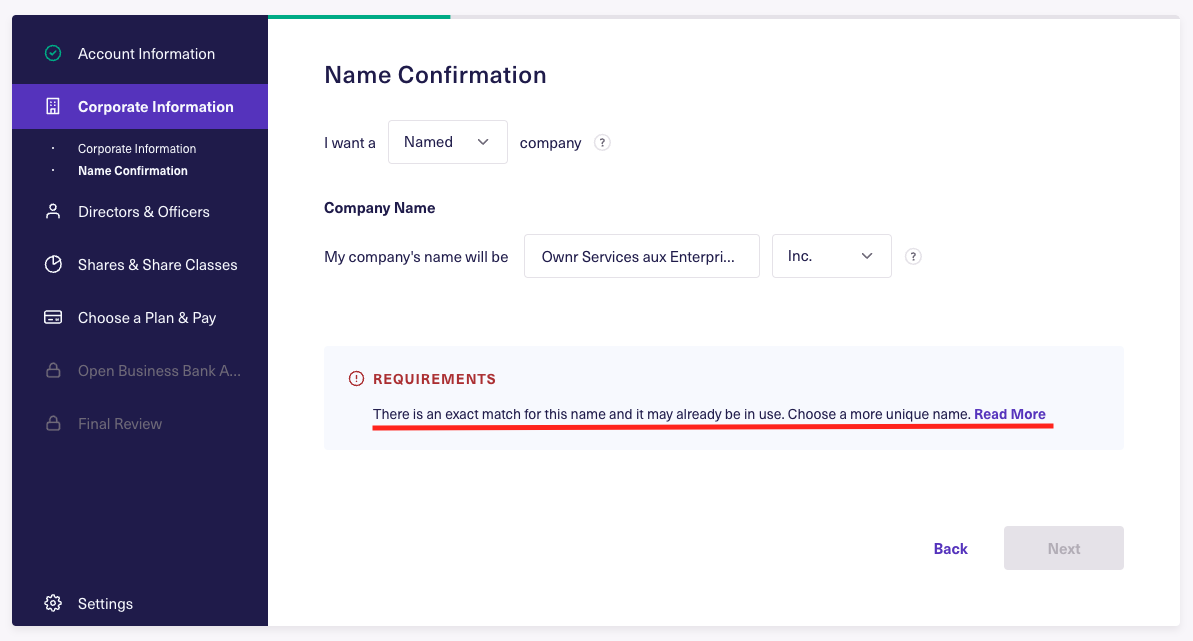 In this case, you will need to choose a new name. Keep in mind that the Ownr name search tool may not uncover all registrations in all provinces in Canada, nor will it check international registrations, so it’s important to also do your own due diligence.

Another name by which an enterprise is identified in Québec (hereinafter, "other name") is commonly called an “assumed name”. It is a name (other than the name in the constituting document) used in Québec to designate an enterprise.

You must declare in the enterprise register any other name that the enterprise uses or plans to use to identify itself when carrying on its activities in Québec. However, such names must be removed from the register once they are no longer used.

To be accepted and deposited in the enterprise register by the Registraire des entreprises, the name and other names of the enterprise must follow certain compliance measures pursuant to the law and certain regulations. The table below indicates the general standards applicable to names.

For more information on creating and using an enterprise's names, see document IN-531, Les noms d'entreprises au Québec (available in French only).

Other information tools are available on the Office québécois de la langue française website to help you learn more about trade marks on public signs and the use of French in Québec. 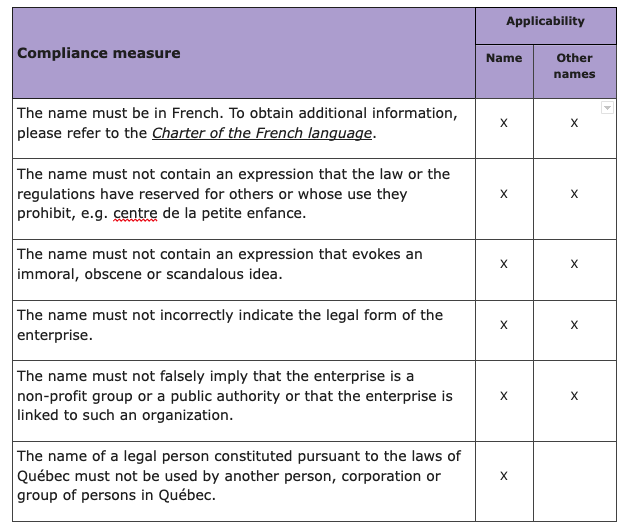 Visit the Charter of the French language.

Did this answer your question?